At our Church District Conference in November, our District President encouraged us to make a sacrifice to attend the temple and enjoy the blessings we will receive.  He mentioned Hong Kong, Taiwan, and Korea.  I hadn't thought about Korea having a temple, but since Seoul was less than 2 hours by flight from Beijing, we thought we should add that to our trip.  What a great blessing it was!  We took the train from the airport and followed directions to walk from the station to the temple where we would be staying in the dormitory.  At one turn, it looked like we'd be walking up a very steep alley, so we paused to look around to be sure we were in the right place.  Three wonderful young men came up and said, "Can we help you?"  ELDERS!!!  Oh, how I've missed them!  They helped us get our luggage up the street to the right spot.  I had to stop to take their picture at my first sight of Moroni amidst the tall buildings. 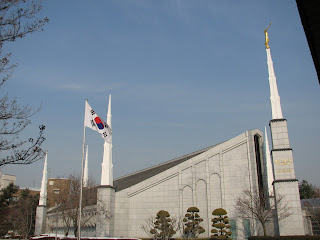 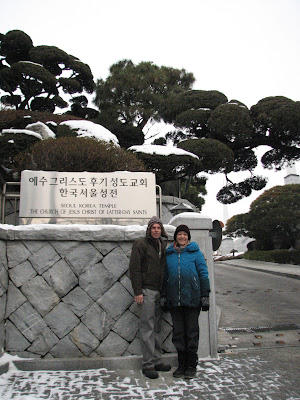 We were able to attend a session Friday night, and two on Saturday morning.  (Kirk even got up at 6:00 and went 3 times on Saturday.)  One session was the military district so it was in English and we met some nice people living here.  Some Koreans we met on Friday night told us we needed to eat some special Korean food called Bulgogi.  She found us a restaurant and ordered it up for us.  We had trouble finding the place--the streets are very narrow and all look the same!  But we finally found it and enjoyed this delicious, though different, feast.

I had just looked on the internet for different attractions to see in Seoul, so we didn't have anyone guiding us.  Fortunately, we were close to the subway and many friendly people speak English, so we didn't have any trouble.  We first went to visit the Changdeokgung Palace.  It was built in 1405, but destroyed during the Japanese invasion in 1592 and restored in 1610.  It served as the main palace for about 270 years when the primary palace was also destroyed. 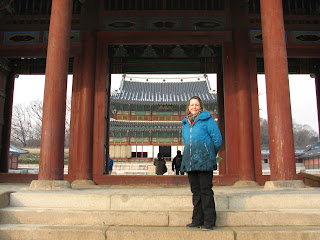 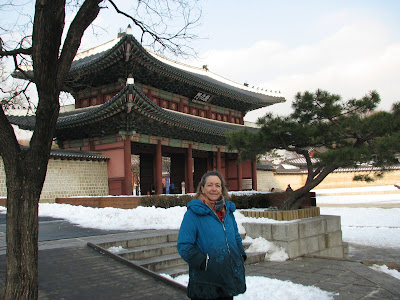 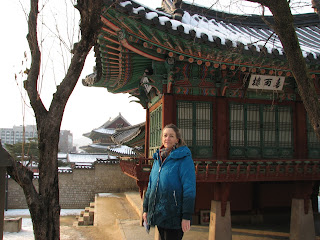 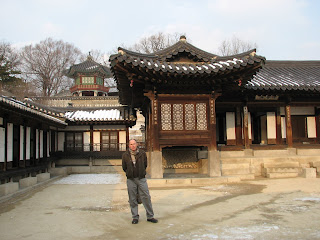 This palace is recognized for its more aesthetically pleasing design, following the contours of the hills on which it is built, rather than the straight block north/south axis buildings of the main palace here (and of The Forbidden City palace).   There is a lot of Chinese influence here, obviously, but also some new angles.  It was very pretty.  Here they had kings instead of emperors.


We were able to take an English tour of the "Secret Garden", a beautiful section behind the main palace with lots of water (ice!), trees and lovely pavilions. 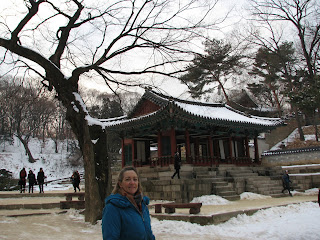 
You can see there was lots of snow--not usually what you want to see when visiting the Secret Garden--but wintertime has its own beauty.  We were just so happy that it wasn't snowing today! 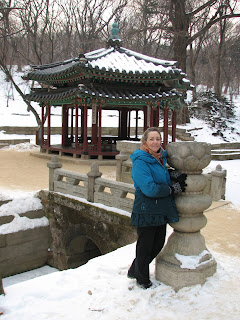 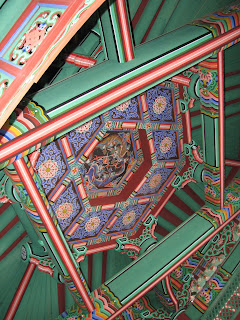 Remember in China, the dragon with the pearl in its mouth?  Here it is again in the same position in Korea.

We went to the pedestrian shopping street, Insadong, that was filled with shops that tourists like.  I drooled over the gorgeous embroidery pillows, purses and other lovely, expensive things.  There were also lots of jewelry boxes with inlaid mother-of-pearl.  The temple is filled with furniture that has inlaid mother-of-pearl, so I knew I had to get a box to remind me of the Korean temple.  I looked carefully to find an authentically hand-made one, with the stamp on the back.  It is beautiful and I'm happy to have it.  We saw a restaurant that we knew we had to try!
What heaven--how can we ever go back to China?  Afterwards, we watched some men making a home-made candy that is unique to Korea.  A rice paste and honey mixture is fermented for 2 weeks, then they flatten out a glob of it in their fingers, roll it in corn starch, then stretch and pull it like taffy.  As they pull it and it has the cornstarch on it, it eventually makes thousands of tiny threads.  They roll some nuts, or chocolate, or fruit inside the flossy candy and you pop the bite-sized piece in your mouth!  It was pretty yummy and we bought some to take home.

Church on Sunday was in the chapel/distribution center/church bookstore/missionary couples housing building next door to the temple. 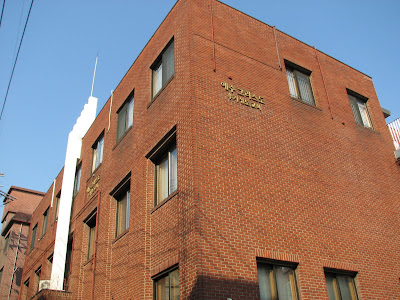 The Ward welcomed us heartily and found translators for us.  We saw a man we recognized--Joel from Tucson!  He played Joseph Smith when I played Lucy Mack Smith in a Stake Play several years ago.  We were amazed that in this city of 20 million people, we would run into someone we knew.  It was a tender mercy for both of us.  He and his wife, Alisa, invited us to dinner at their home, even though she just had a new baby a month ago!  But with their five children, we got to play grandparents--a job we have sorely missed.  And their children were aching for the love of grandparents, so we were able to fill their void.  They made us chili and cornbread for dinner--absolutely heavenly!!  We had such a wonderful time together and it was like spending a Sunday evening with family.  I am so humbled by the way the Lord works in our lives.  We thought they were blessing us, and they thought we were blessing them.  Isn't it great?  I kept remembering how Pres. Latimer said we would be blessed for our sacrifice to go to the temple.

After Church, we went to visit Namsan Park and Namsan Tower.  This is on a large hill in the geographical center of Seoul, and the tower has views all around.  It was a hike to get to the tower, but we were in shape after hiking the Great Wall of China!


Korea is great about playing things up for the tourists.  We saw these costumed fellows around the battlements on the hill. 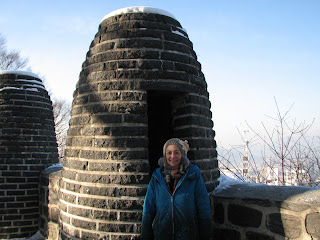 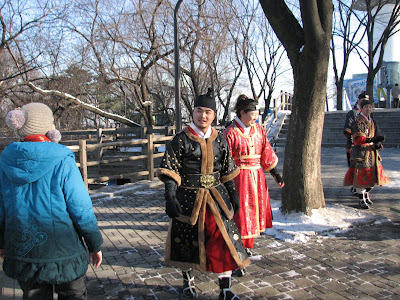 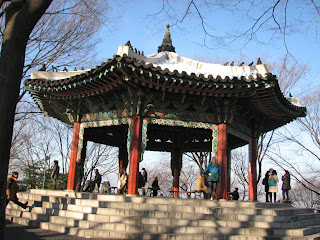 For a price, you could take an elevator up into the tower.  You could also pay extra to have your photo taken, or eat at one of the restaurants available.  And, of course, there were some gift shops.  But we just enjoyed the views! 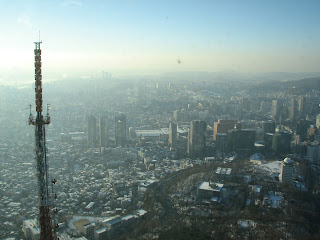 There was a delicious Paris Baguette pastry shop where we had breakfast on Monday.  They made a "sandwich" from two pieces of French toast with a mapley filling in between.  Yum!


We then went to visit the main palace called Gyeongbokgung.  It was founded in 1395 and was the center of power, politics, economy and culture.  The name means "Palace Greatly Blessed by Heaven" and it was used for more than 500 years.  The Japanese destroyed this palace in 1592, it wasn't rebuilt until 1867, then in 1911, the Japanese again leveled all the buildings and put their own colonial headquarters out front.  This palace was restored in 1990 and they are still working on it.  It looks very similar to the Forbidden City in Beijing.  Qing Dynasty China was the only state through which Western culture and ideas were introduced to Korea.  We arrived just as they were conducting a changing of the guard.  It was awesome!


Gyeongbokgung Palace Changing of the Guard 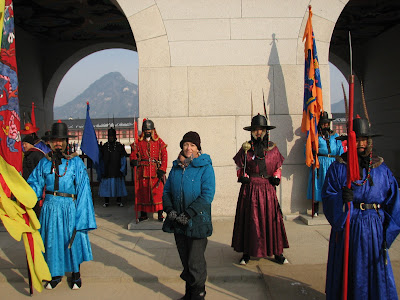 The English-speaking tour was going to begin in a while, so we went to the Folk Museum on the grounds first.  There were some very interesting displays.


Our English-speaking tour guide spoke rapid-fire English with a heavy accent, but that was more than we ever got anywhere in China.  We had to pay close attention to understand her. 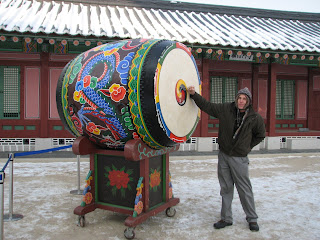 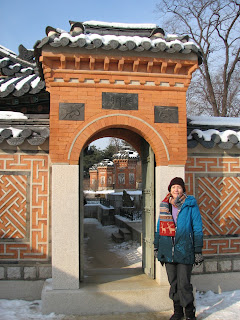 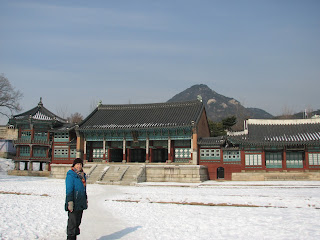 Korea was the first East Asian country to use the US-based Edison General Electric Company's plan to generate power with this pond's water.  Amazing!
The proper feng shui is to have mountains in the back and water in the front.  This artificial canal was at the front of the palace complex with the imaginary animal Seosu keeping evil out of the water. 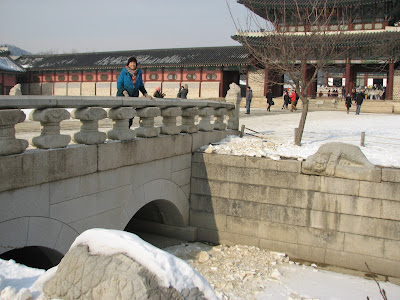 Down the meridian of the street was the statue of King Sejong, a highly-educated man who invented the rain gauge, hemispheric sundial and water clock, as well as other instruments for astronomical observation (around 1438). 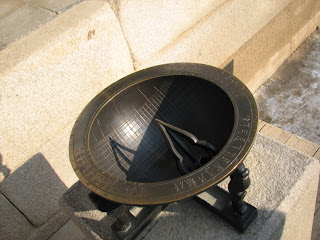 King Sejong also developed the modern Korean writing system.  It's based on the shape of your tongue and is apparently very easy to read (pronounce) once you learn the basic tricks to it.  Not me--I'm not even learning Chinese!

This hemispheric sundial shows not only the time, but the season!  He knew the earth was round. 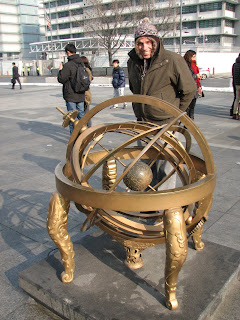 A little farther along we came to the statue of the Korean naval commander, Yi Sun-Shin.  He was never formally trained, but he never lost a battle, and was especially revered for beating back the Japanese when he was severely outnumbered.

In Korea, 1% of all major construction project's cost must be used for art.  We saw some unusual art (?) in town.
There are also some unusual modern buildings with unique architecture. 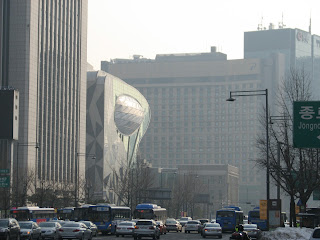 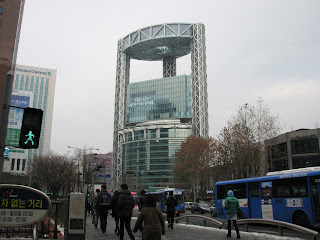 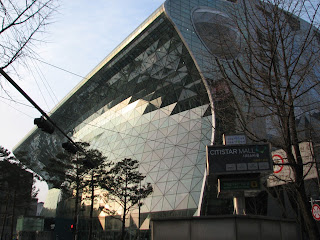 The area downtown had a beautiful stream called Cheonggyecheon that had been cleaned up and turned into an art display and nature walk.  It used to be a polluted stream and elevated roadway.  We walked along and enjoyed the winter wonderland. 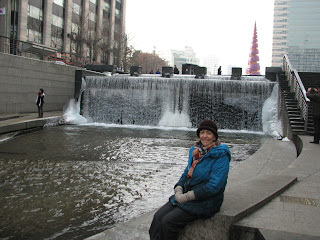 There was one section of the wall that had a huge tile replica of a famous painting depicting one of the Kings making a parade to the grave of his father.  They even had speakers in the rocks that played Korean instruments (pipes) and horses hooves so you were really part of the scene!  It was really fun. 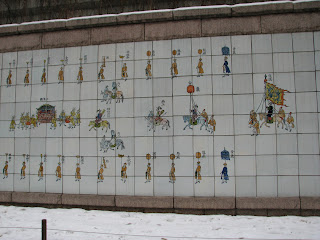 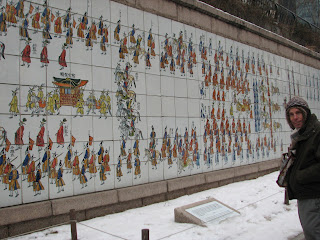 We found a Mr. Pizza restaurant and decided to give it a try.  It was unique and yummy.  I love beautiful food!

We walked through the Namdaemun Market area to a theater where they were playing the longest running show in Korea's history.  It's called Cookin' Nanta.  It's billed as "Jackie Chan meets Beni Hana meets the Marx Brothers".  It was a hysterical comedy, with very little dialogue, where they were doing lots of rhythmic "songs" while banging with and on kitchen utensils, then they chopped up food and flung it around the stage.  All of this was the story of a "boss" who brought his nephew to work with three chefs and they were giving him a workout.  Anyway, it was lots and lots of fun.  I missed the Goodmans who we used to see shows with--wish you were here! 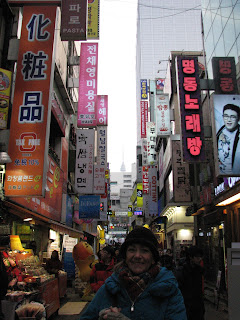 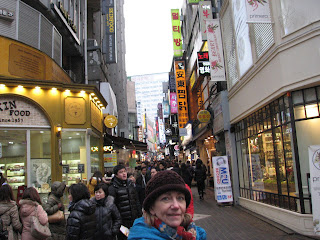 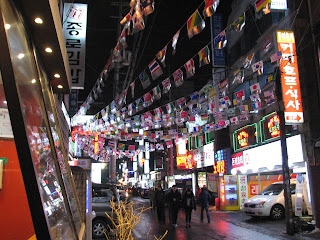 We had time the next morning for another temple session.  It was the missionary English session.  It was such a treat to be with all the missionaries!  We felt like part of them.  We were truly blessed by taking this opportunity.  Who knew we'd end up going to Korea?
Posted by Karen at 6:40 AM 3 comments: