Shortly after arriving in Chengdu, Kirk was asked to give a talk in our church Sacrament Meeting on missionary work.  This was surprising, as the Chinese government forbids us from doing any proselyting towards Chinese nationals, including distributing any literature.  Each week before our meeting, the Branch President reads the restrictions under which we are allowed to meet as foreigners in China.  We were strongly counseled to let our friends and family know that we were NOT on a formal mission in China, and that when missionaries DO go to China, it will be through the 'front door'.

Our friend, Jake, has a son who plays soccer with local youth, and one of his teammates was a boy named Regan.  Regan's mother was interested in Christianity.  She was raised in Chengdu, but moved when she was 28 to America where she married.  She changed her citizenship and held an American passport, thus making her a 'foreigner' in China.   Because she was considered a foreigner, it was 'legal' for Jake to invite this woman, Lyncy, to attend church with him.

Lyncy and Regan came to Sacrament meeting and liked what they felt.  I was the Relief Society teacher and was very careful to explain things so that she could understand what I was teaching, and, more importantly, feel the Spirit of the Lord in our meetings.

Lyncy spoke to me the next week and told me that she really liked the way I taught.  She wondered if she could invite her friend, Lily, and they could come to my house and I could teach them more about 'the God'.  Lily, also holds a 'foreign' passport (from Hong Kong) and speaks limited English, but Lyncy speaks English quite well.  How thrilling it was for me to have this chance to preach the gospel...and in China! 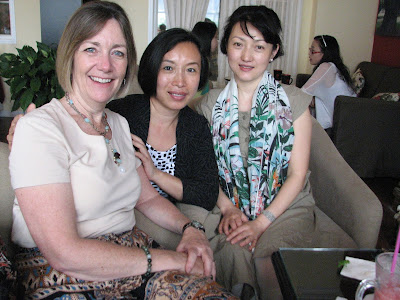 Lyncy (on the left) and Lily came to my home and asked me a few questions.  I taught them that they were daughters of a Heavenly Father, and that His Son came to earth to redeem them from their sins and bring them eternal life.  They had been to other Chinese Christian churches, but they said that they wanted to find the right church, where the people acted in their lives the way they preached in their Church.

I showed them a photo book with 35 years of our family's photos, from our wedding picture to the wedding picture of our youngest child, Mark, and all the weddings and grandchildren born in between.  They poured over the book and afterwards said they could see that our family lives "with much harmony", and that I must be a very good mother.  A few weeks later, Lyncy invited me to lecture to a large group of her friends (about 40 people) and teach them about American parenting styles.  The Chinese are suffering with "Little Emperors", children born under the one-child policy who are growing up spoiled and feeling entitled, with no respect for others and little self-discipline.  With an interpreter, I taught from my experience and from the Family Proclamation.  There were many questions as parents struggle to raise their children with moral strength and character.

Lyncy and Lily continued to attend church, and we arranged for a Mandarin-speaking returned missionary in the branch to teach them in their own language during Sunday School.  The more they heard, the more they learned, the more they delighted in finding The Church they had been seeking for 28 years.

Lyncy took a trip to Hong Kong where she was able to go see the Temple and the distribution center.  A series of events that happened while she was there taught her that God was mindful of her and wanted her to live as taught by the Latter-day Saints.  She bought every piece of church literature printed in Chinese and came home with a suitcase full of reading material, and an excitement about having her prayers answered.  She had discovered the gospel she had been seeking for all these years.

She began inviting me to different dinners to introduce me to her friends.  She wanted to share what she had discovered.  She was disappointed that she couldn't invite her Chinese friends to come to church with her, so she sought out the Chinese Branch of the Church and attended there once so she would know where to send her Chinese friends.  (There is a Chinese branch and a Foreigners branch, but they are forbidden to meet together.)

Over the course of the next few months, she and Lily grew in testimony and commitment, changing their lives to live as the Savior taught.  They wanted to be baptized before we went back to America and invited Kirk to perform the ordinance.  Kirk learned the baptismal prayer in Chinese and was blessed and honored to baptize Lyncy and Lily into The Church of Jesus Christ of Latter-day Saints. 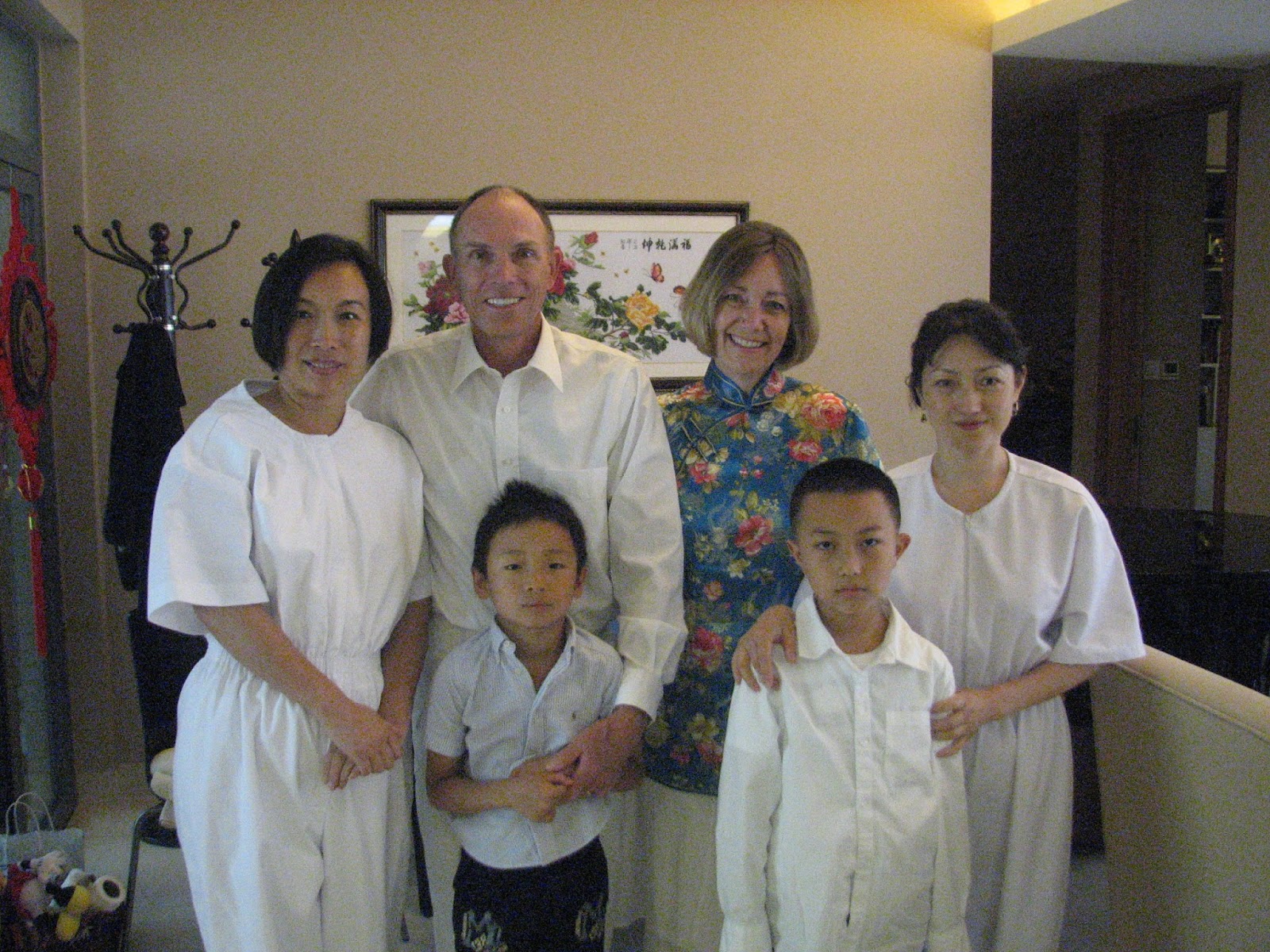 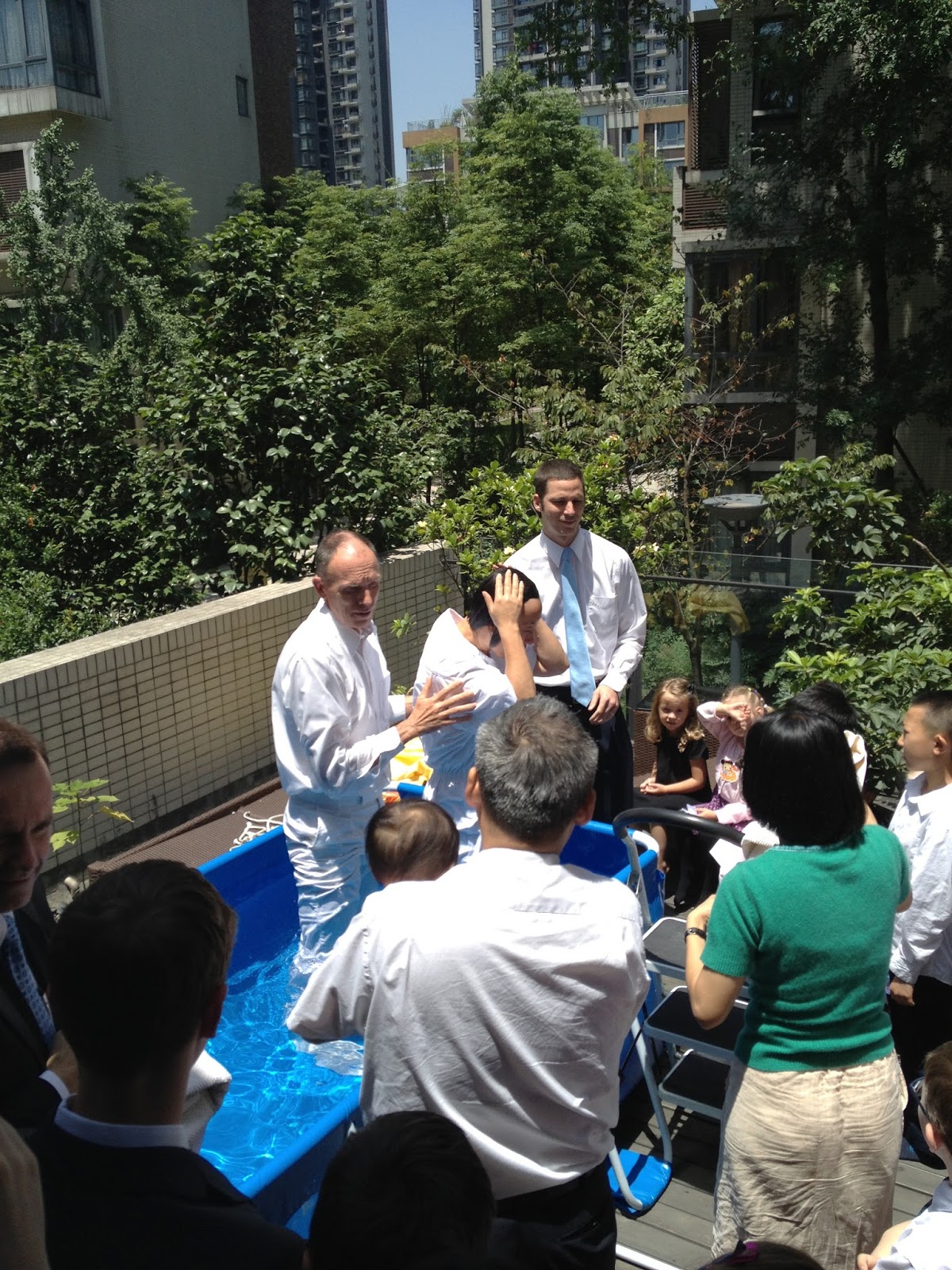 Regan and Bob can't wait until they are baptized, and have been helping their mothers keep the commandments. 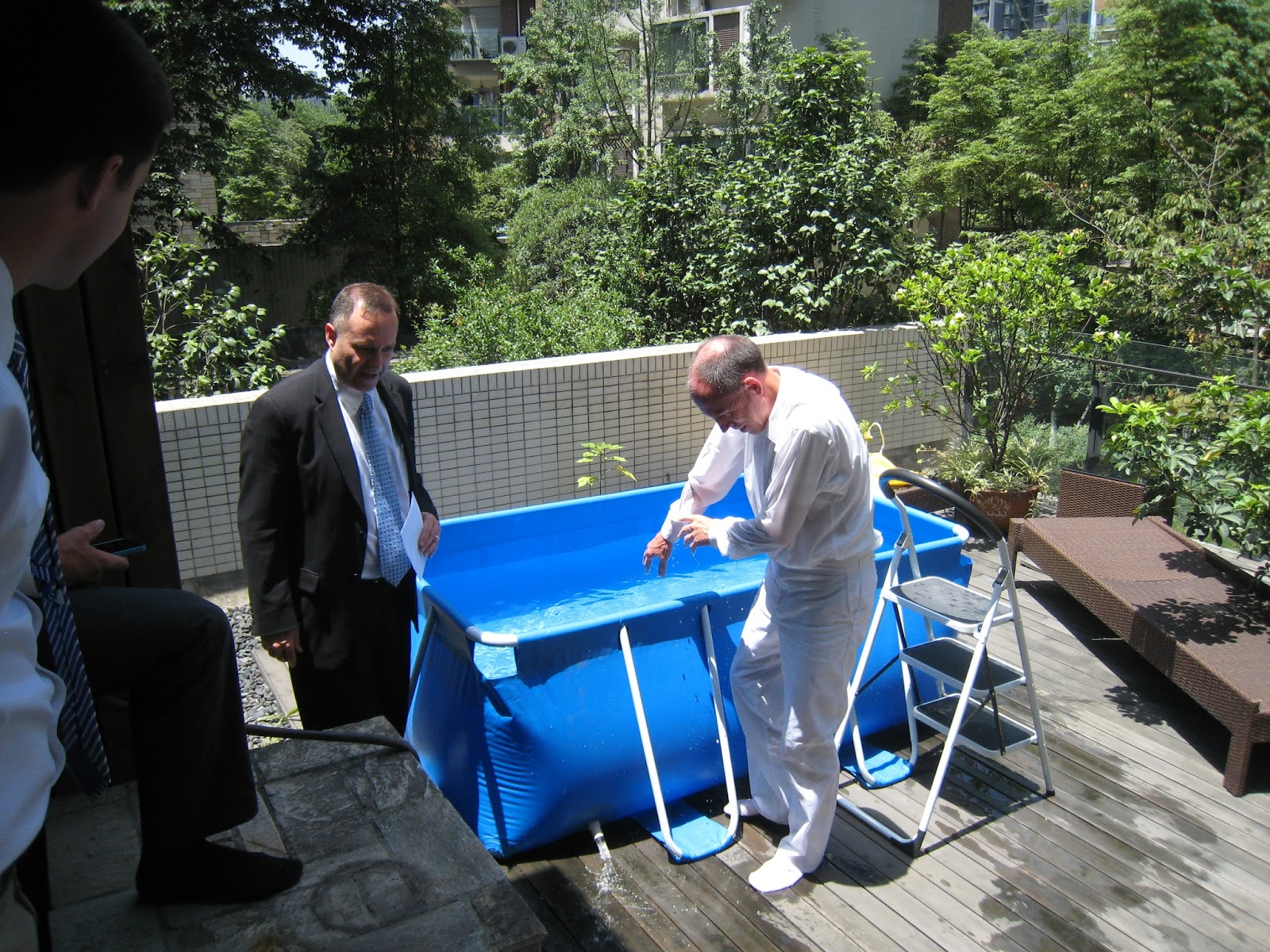 I was asked to speak at the baptismal service, and I testified that I don't think I came to China to teach English--I think the Lord sent me there to meet Lyncy and Lily and share with them the glorious plan of salvation.  It reminded me of the scripture that I chose as my "mission" scripture: Alma 26:36-37

Now my brethren, we see that God is mindful of every people, whatsoever land they may be in; yea, he numbereth his people, and his bowels of mercy are over all the earth. Now this is my joy, and my great thanksgiving; yea, and I will give thanks unto my God forever. Amen.

God is mindful of those in 'strange lands', and of those of us who choose to be 'wanderers' in their land to bring them His plan.  Now Lyncy and Lily are 'numbered' among His people.  They will be great missionaries among their people and bring the gospel light to their families.

Lyncy wanted to thank us and send us off with a going-away party.  She planned it on the Chinese Children's Day, so many of the activities were prepared for the children.  Each child received a little bunny and some frogs for pets to take home! 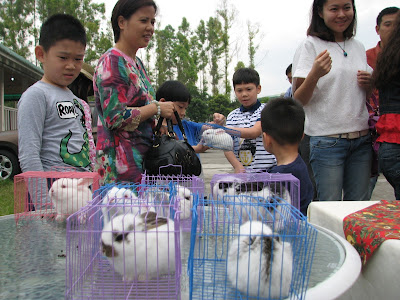 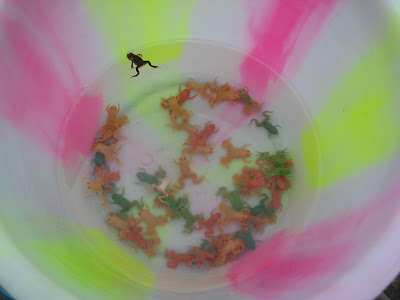 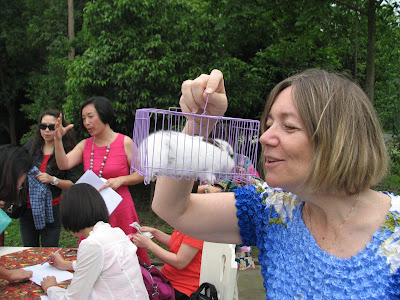 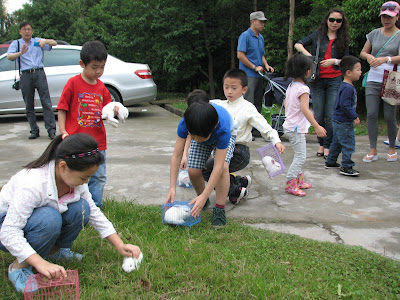 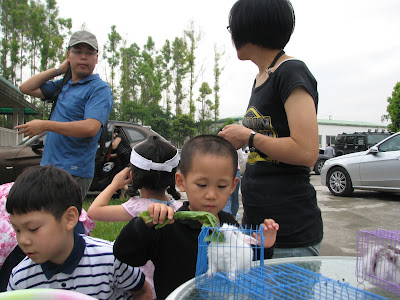 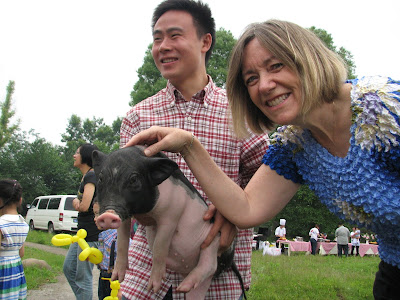 This man is the caterer of the party--Peter of Peter's Tex n' Mex fame, our favorite restaurant in Chengdu.  They have the best fajitas of anywhere in the world, and I'd give just about anything for one of their raspberry milkshakes with REAL ice cream!
(NO, we did NOT bar-b-que this pig--he was one of the farm animals for the kids to enjoy!)

Kirk and I were introduced as the guests of honor: 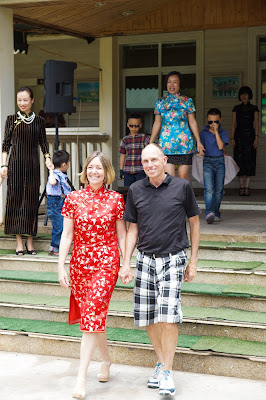 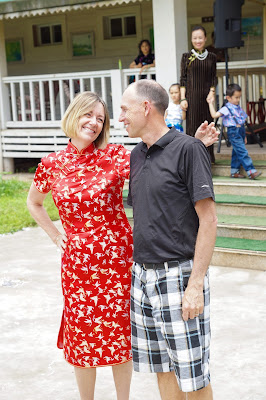 There was a program, including singing, playing the guzheng, and a qipao (say "chee-pow" for the Chinese dress) fashion show! 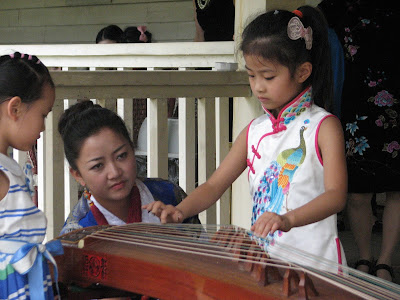 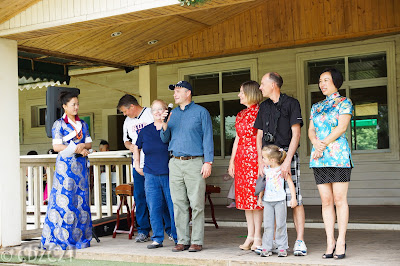 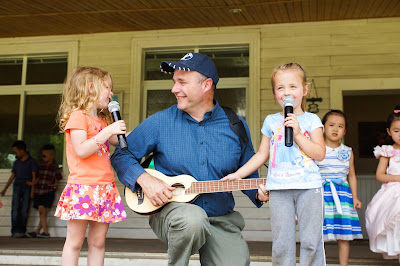 This is our Branch President Doug Weaver, and his wife, Melisa.  Doug played the guitar while the children sang along with him. 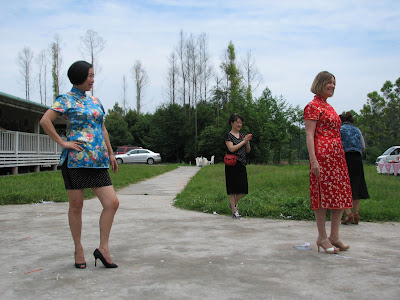 The girls took me to a seamstress who made me two custom qipaos--Lyncy models my short one.  Unlike me, Lyncy has done some professional modeling!

Next came the delicious buffet meal. 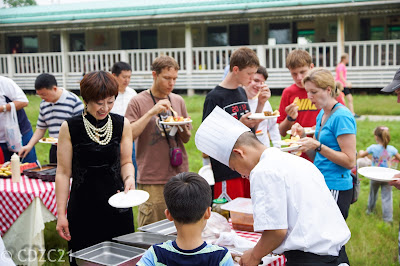 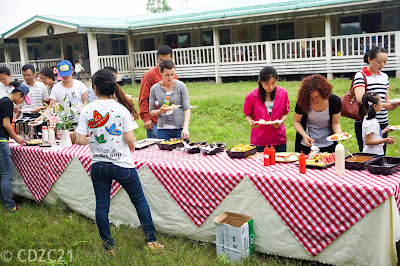 After eating, we gathered in groups, and several of the parents started asking me more questions about how to raise their children.  I was grateful for the opportunity to teach gospel principals about families.

A final group shot ended the party.  The Chinese LOVE to take pictures!  (Don't we all!) 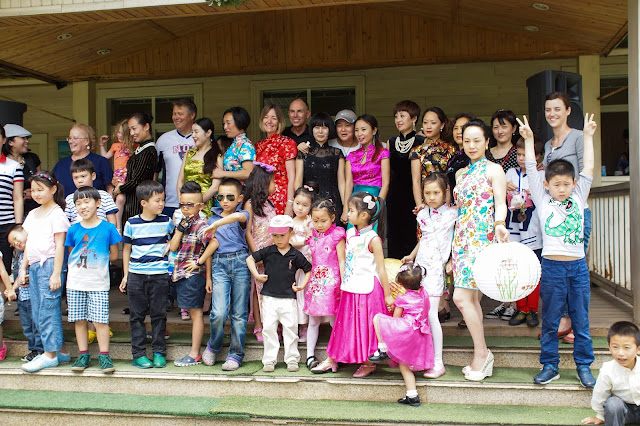 We were humbled to be honored in this way, and so grateful that the Lord brought us together with these two incredible women.  On our last night in Chengdu, Lily invited us to her home for dinner, she taught me to make kung pao chicken, and we enjoyed the meal with her cousin and Bro. & Sis. Chen who will teach Lyncy & Lily the lessons for new members.  It was a fulfilling culmination to our China Teachers experience.  Zai Jian, Chengdu. 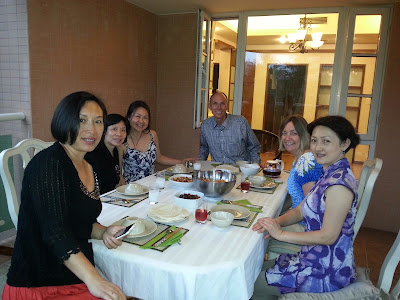